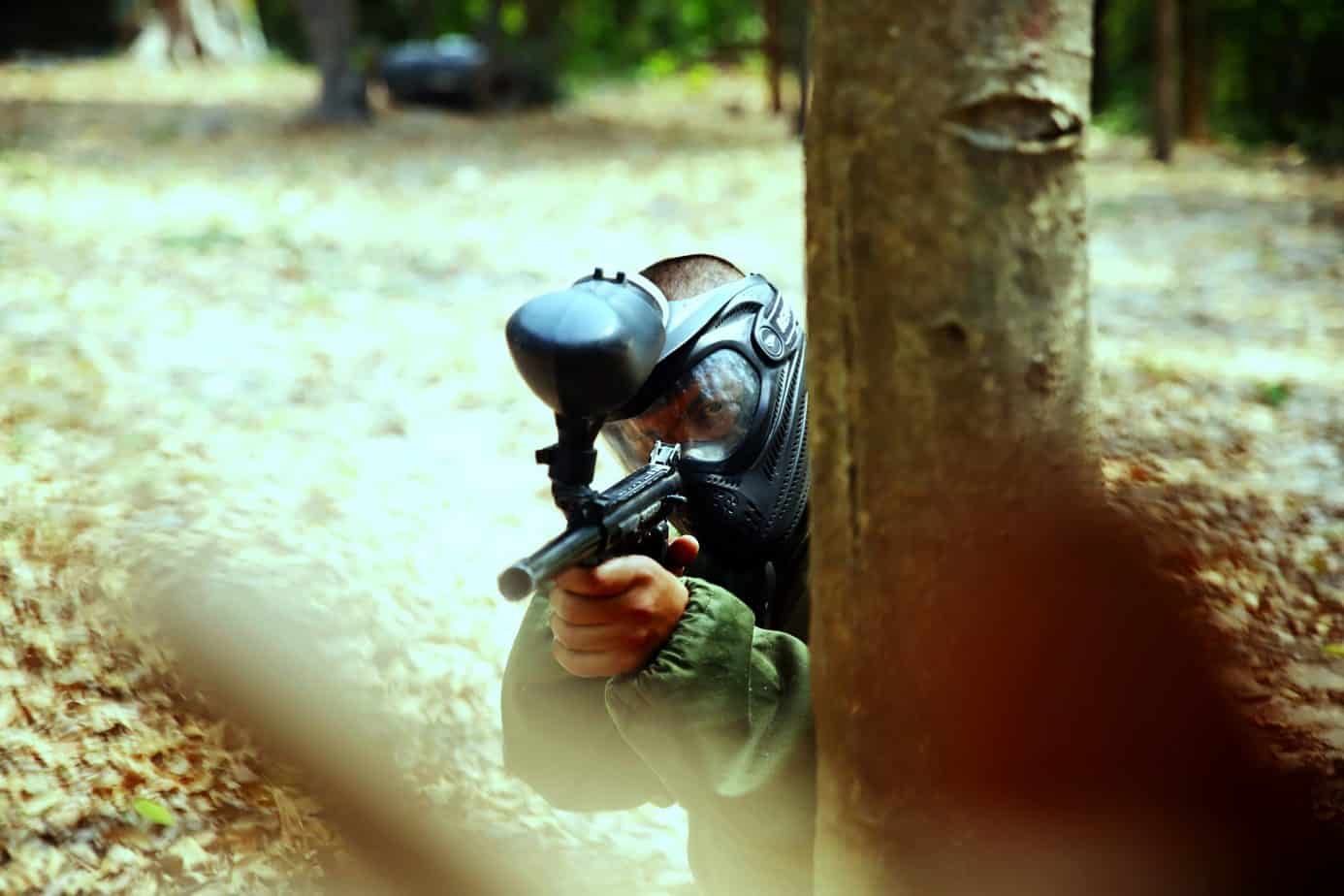 What can make paintball even more competitive and tactical than it already is?

The idea of having to conserve ammunition and shoot only when necessary can be both exhilarating and intimidating to some.

They are the closest it gets to realistic, military-grade gameplay. The kind you’ve enjoyed on-screen whenever you compete with friends in Counter-Strike or Battlefield. Only this time, it will be real. Well, sort of.

Tippmann is renowned for its manufacturing excellence, a reputation it has made after decades of producing first-class products. And, in this Tippmann TMC review, I will unveil how this model perfectly reflects the superiority of Tippmann models.

Being able to use both conventional and magfed mechanisms (although only the latter is preferred), the Tippmann TMC is a feat of paintball engineering.

This paintball marker looks and feels like a genuine military-style assault rifle, which adds a whole new dimension of realism to your paintball sessions. The frame is fairly durable, if you know how to care for your marker, you can make it last for quite some time.

Overall, the build quality is very impressive, considering how much this marker costs. It works just as fine as it looks, and when coupled up with some accessories and upgrades, becomes a marker to be feared on the field.

In magfed contests, accuracy is all that matters. You can’t afford to waste your shots, they must connect and hit where you want them to. This is exactly what Tippmann TMC offers: an excellent hit ratio and accuracy.

Being able to land projectiles as far as 150 feet away (though this range may be a bit shorter in practicality), and accurately hit targets at impressive distances, the TMC is a valuable asset for magfed duels.

This is all the more valuable considering that you’ve got only 20 paintballs per mag (and this number is more or less consistent with most of the best magfed models).

You can add a scope and further improve your chances but when it comes to long-range shots, your skill level is also an important factor. But there’s nothing that a little practice can’t help you accomplish.

As with any other quality Tippmann marker, the TMC also allows you to customize and upgrade it to your liking. The base marker plays decent enough, but if you want competitive performance, I highly recommend that you tweak it a bit, especially with a barrel upgrade.

The marker uses Picatinny rails to mount additional hardware on them. These include lasers, scopes, and so on; you can also tune up the trigger for a better fire rate. A barrel upgrade will also go a long way in improving the marker’s accuracy.

When it comes to customizability and upgrades, you’ve got a surprisingly high number of options available for this affordable model. The upgrades will add a bit to the total cost but not by much and it will be worth it.

Some Other Features Of The Tippmann TMC

My Likes & Dislikes Of The Tippmann TMC

The TMC performed well on several fronts when I tested it, but I felt that it could’ve been a bit better in other areas.

Here’s what I feel:

The Stuff I Loved

The Stuff That Could’ve Been Better

Based on several TMC reviews of customers, I found that some users would’ve fared much better with a different model. For example, if you have a larger budget you can opt for the X7 Phenom instead.

If you feel like the TMC does not feel ‘the one’ for you, then you can try out one of these options:

The TMC is best described as the magfed version of the Cronus. If you prefer the good old hopper-fed mechanism, but prize the tactical approach just as much, then the Cronus will be perfect for you. And to make things better, it is just as customizable as the TMC.

The Tippmann TMC offers a decent fire-rate but if you feel like getting something faster then the Planet Eclipse Etha 2 is an excellent option. This electric marker can unleash as many as 20 shots per second, which is all the more devastating at close range.

If you’re okay with the TMC or any of the two aforementioned models, then you may also want to equip yourself with a decent sidearm. If you find yourself out of ammo mid-fight, then whip out your secondary weapon, blast a few rounds at your opponents, and then dash for cover.

What Are The Users Saying?

Generally, the Tippmann TMC has been well-received.

Users applauded its versatile features and design. The comfort and lightweight build are two focal points among the many Tippmann TMC Magfed reviews posted by satisfied customers. Several words of praise were also written for the upgradable features of this marker.

However, on the counterpoint, others expressed dismay over the marker’s hopper-fed mechanism, which is prone to blockages. I personally found it perfectly reasonable as a magfed semi-automatic model.

If I missed something in this Tippmann TMC review, then perhaps this section will clear it up:

Can I add a custom barrel to this marker?

Yes, you can replace the barrel with a better, more accurate one.

How many magazines will be shipped with this marker?

You will get two magazines, and a dummy one (if you want to use the hopper instead). You can also purchase additional mags as needed.

How many rounds can I have in my magazine?

The maximum capacity is 20 rounds but I found that having 19 works better.

Which one should I use, carbon dioxide tank, or HPA?

HPA, definitely HPA. Although the marker is compatible with both types, HPA is far better than its counterpart.

Is it necessary to add accessories?

No, it’s not necessary, but it will be worth it. If you’re on a tight budget then just go for a barrel upgrade and a scope, these will be immensely helpful in your gameplay.

Before moving on, let’s have a look and check how well the Tippmann TMC shoots in this short YouTube video.

This Tippmann TMC Magfed review was based on how I felt about the marker and the consensus of users. Generally, the marker performs remarkably well, outgunning several models that cost more than this one.

It is very accurate and hence perfect for ammo conservation in a magfed competition. Just put in a couple of accessories and get a barrel upgrade, and you’ll have a marker that plays comfortably for you but hits hard on your opponents.

Some people have reported problems with the hopper-fed mechanism, and while this does not happen in every case, I still do recommend that you look at it as a magfed-only option.

This concludes our present journey, I’ll catch you with the next one, and in the meantime, give ‘em hell paintballer.