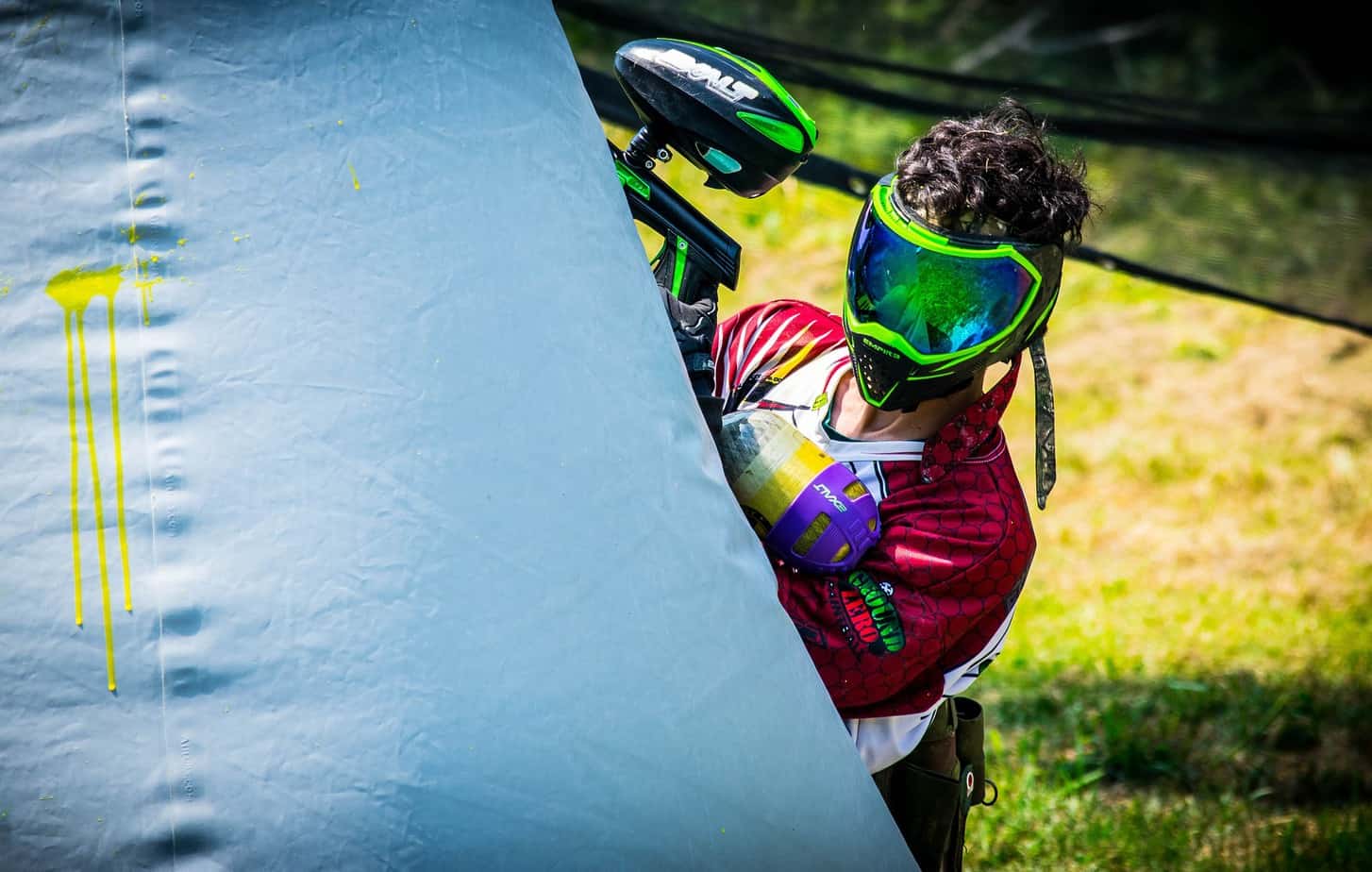 The Empire Mini GS is a remarkable follow up of the Empire Mini – a marker that received wide acceptance from the paintball community in its prime.

Do all these make it the perfect paintball gun? Is it a better marker for a noob, intermediate or pro-level paintballer? Is it worth the cost?

Like you, I was curious. So I decided to take one out for a spin and ask a few pro friends who have used this marker for their opinion. And I’ll walk you through what you can expect in this Empire Mini GS review. 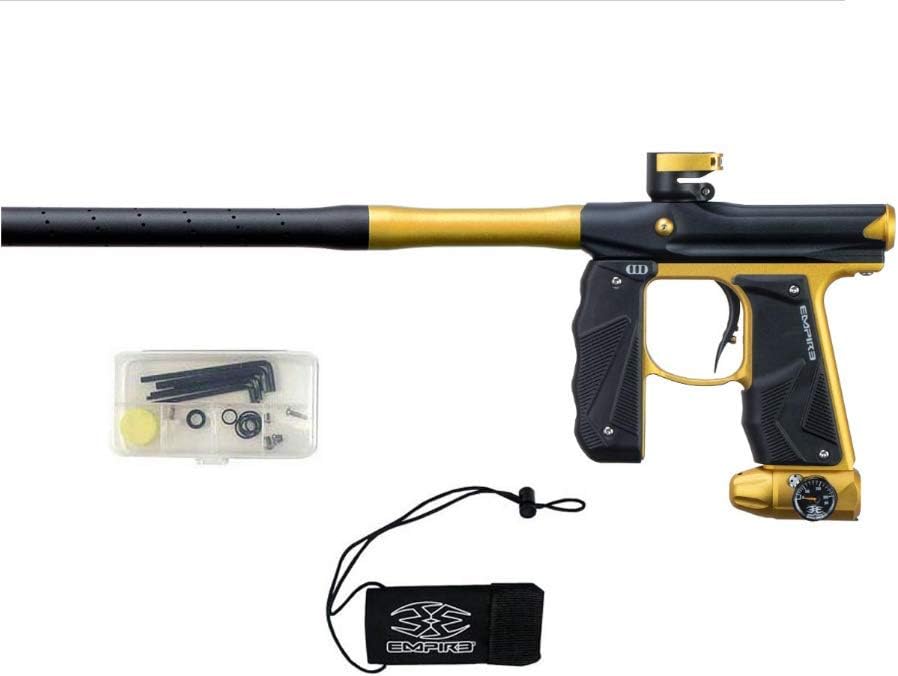 The Empire Mini GS is a lightweight electro-pneumatic paintball gun. Don’t be fooled now. It sure does pack a lot of firepower in that small frame – and get a lot of paintballs ready for the action that awaits.

This little baby can fire up to 325fps. However, it has multiple shooting modes if that’s too much firepower for you.

It’s arguably the best marker I’ve seen at its price. It’s the perfect option for a first-time owner or intermediary. A pro might prefer having it as a backup firearm.

The upgraded Empire Mini GS is devoid of trigger issues that plagued its predecessor. Also, it adds a full wraparound rubber on the trigger and forearm grip. It’s ASA and foregrip attachments got beefed up for extra durability and performance.

But this marker still has one issue, well, not really an issue. It’s mini. The handle can be small for folks with large or long, or freaky hands, like me.

The Mini GS comes with a battery, barrel sock, Allen wrenches, and a few spare parts like O-rings.

Shoot Straight Out The Box

This marker is as easy to use as it always has been. You won’t need to fiddle with many parts or settings if you’re a beginner or really just want to get your gun and fire.

Setting up speed only takes an Allen wrench. And in minutes, you’d be firing anywhere from 275fps to 325fps at will.

However, you may need to toggle a bunch of led lights to select your preferred firing mode. Essentially, it’d take only a few minutes (scratch that, seconds, if you aren’t new to this) to go through shooting modes. But if you’re feeling generous, you can buy the OLED Redline board and take it down to seconds. Mount it on the foregrip and navigate the firing settings like a phone!

Moving forward, its handling has improved tremendously. With the rubberized grip, your palm won’t slip off the grip while you’re sweating it out on the battlefield, for instance.

Essentially, it’d take only a few minutes (scratch that, seconds, if you aren’t new to this) to go through shooting modes. But if you’re feeling generous, you can buy the OLED Redline board and take it down to seconds. Mount it on the foregrip and navigate the firing settings like a phone!

Going from 12 inches to 14 may seem like a small difference, but it counts. And any improvement you can get is welcomed.

But, of course, there’s more to shooting accuracy than just a longer barrel. There’s the…

Like it or not, maintaining (disassembling it for cleaning) the marker is one of my biggest pet peeves. It’s simple, but it takes a lot of caution to avoid jamming the gun from misplacing or not screwing a part properly.

But with the break beam anti-chop eyes of the Empire Mini GS, you won’t need to clean as often. The break-beam eye has reduced the possibility of getting chipped paintballs in it to almost nothing.

This way, you won’t have to stress over regular maintenance or jamming your gun from it. You don’t want to develop bad habits and not clean your marker for this reason.

Better yet, it’s clamping feedneck would fit any hopper on the market so that you can get the best.

You may not fully appreciate this if you haven’t used the Empire Mini.

Here goes something… First, the Mini GS has stronger ASA and foregrip attachment points. For parts that are regularly removed, this reinforcement is crucial – a proof of the Empire’s attention to its customers’ cries.

Even better, it has a sturdy lightweight aluminum frame and a new clamping feedneck on the breech. With these subtle features, you can rest assured the marker would last till you’re due for an upgrade (if you like).

The inclusion of a micro switch trigger further reinforces the durability of the Empire Mini GS.

But more importantly, this trigger system can improve your shooting. Like muscle memory in basketball shooting, for example, the click of the trigger after successive shots leaves an imprint in your head. You know when and how shots hit without overthinking it.

In short, you’d hear a click after each pull of the trigger.

The addition of this simple feature is much welcomed. Besides, most paintball guns with this feature usually cost a couple more bucks.

Without the On/Off ASA, you’d have to follow a stressful routine to remove the tank. In turn, impatient guys end up damaging the threading of the ASA.

But with the flip of a lever on the Mini GS, you can turn the ASA regulator off and bleed air to remove the tank. Then switch it on to lock and supply air to the marker.

Alternative To The Empire Mini GS

This is the bigger cousin of the Empire Mini GS. They are almost identical when it comes to performance, but the Axe has a larger grip frame.

So if the small trigger area of the Mini GS was a deal-breaker, go for the Axe.

But would you be paying over a hundred bucks for just a bigger handle? The answer is no. The Empire Axe also features a handy design that allows you to remove the bolt for cleaning with the push of a button rather than unscrewing it.

Also, you don’t have to take apart the marker if paint gets in the eye. All you have to do is unscrew the bolt in the eye compartment and take it out for cleaning. In other words, it’s easier to clean.

Lastly, the Axe doesn’t have a gauge on the ASA regulator. This way, your shooting hand would be free of the restriction, if that matters.

Users have been astounded with the performance of the Empire Mini GS right off the bat.

It’s often regarded as “the little marker,” but only as a compliment. It’s remarked to fit well in the hands, and even a few tall players think so too. It really depends on how you like to hold your gun.

More often than not, it’s regarded as a good bang for the buck, not unlike the Dangerous Power G5.

What firing modes does the Empire Mini GS have?

The Mini GS can switch between the following firing modes:

The Empire Mini GS depicts these modes with a LED light on the foregrip. The trigger is used to activate the light and to choose your preferred firing option.

How long is the barrel?

The Empire Mini GS uses a 12-inch long 2-piece aluminum barrel. However, the latest models are set to use a 14-inch long micro-honed barrel, and it’s totally worth waiting for.

Can I use a CO2 tank on this marker?

No, you can’t. And for convincing reasons too.

For one, CO2 tanks are filled with mostly liquid, and it can damage the solenoid and other parts of an electro-pneumatic gun like the Empire Mini GS.

Also, the manufacture clearly states not to. Get a quality HPA tank and hopper for the best performance.

Now that’s a wrap. Ok, wait a minute. Have a look at the Empire Mini GS up close and in action in the hands of this kid.

Quite frankly, you can’t go wrong with the Empire Mini GS paintball gun.

It’s well worth the money, maybe even more. Going through the Mini GS review, you can’t quite figure that out.

The Mini GS is easy to use. And you even have the resources of a sea of youtube videos if you aren’t the handy type or have any issues.

Whether you’re a beginner or skilled player, it’d serve you well. Its rapid and accurate firepower, little recoil, lower noise level, and easy cleaning are critical.

But be aware of its reputation as a “little gun” before purchasing if you’re a big guy.

Check out the best deals for the little guy over here now.