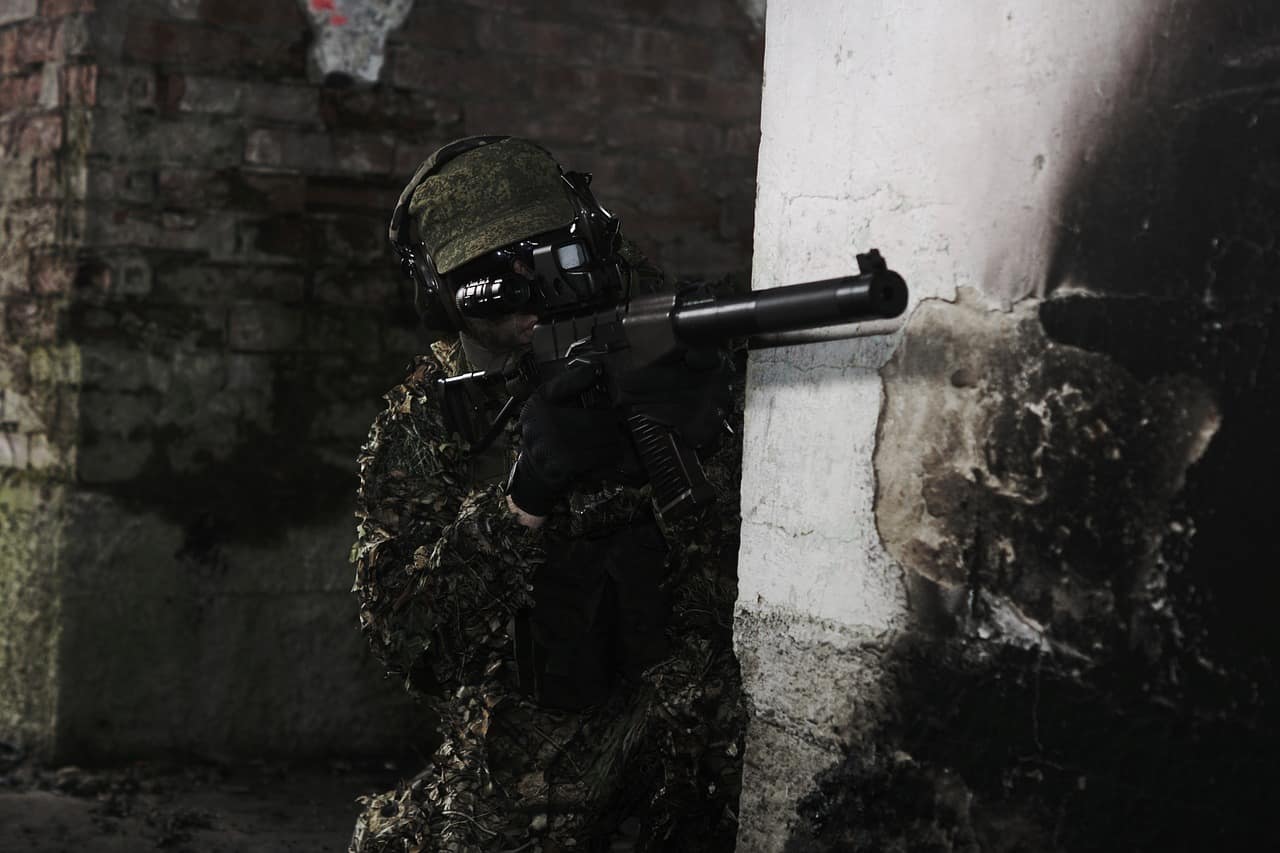 At some point, you’ll want to do away with your hopper-fed models in favor of a more tactical and realistic option: a mag-fed paintball gun. Not only do these models look and feel like real military-grade weapons, but they will also double up the excitement factor in your duel sessions.

In this article, I will unveil my top picks for the best magazine fed paintball guns in the market to help you make an informed decision.

My personal favorite is the Tippmann TMC MAGFED Paintball Marker, but there’s more from where that came from so hang tight and read on.

If you’re a paintball aficionado, odds are you’ve already heard about Tippmann, it is after all a leading brand in this niche. The Tippmann TMC MAGFED Paintball Marker has a realistic design with impressive aesthetics and works just as well too.

It is lightweight yet sturdy, perfect for the vicissitudes of field-play. You have the option to use either the two magazines provided, each having 20 rounds in them, or attach a dummy magazine and use the conventional loader instead.

In both cases, the model offers appreciable firing speeds in the semi-automatic form, meaning that you will have to squeeze the trigger every time for a shot. The design also excels in one more area: customizability.

You can attach scopes, upgrade the barrel, add lasers, and so on. These customization features will let you play according to your liking, I for one like to have a decent scope mounted on the railing for precise long-distance shots.

This marker can transform the ‘all guns blazing’ style of the paintball sport to a more surgical ‘counter-strike’ approach.

The Tippmann TMC MAGFED Paintball Marker is a perfect all-rounder model for those who want the best of both worlds. It can operate as a mag fed model or use the conventional loading mechanism. In either case, it delivers perfectly in all areas.

The Tippmann TMC .50 Cal model is a smaller variant of the aforementioned .68 version. However, it is in no way inferior to its cousin. This model features a realistic assault rifle design, parallel to those used in actual combat.

The tactical design and lightweight frame make this model perfect for launching covert and overt attacks in the field. Don’t be deceived by the light frame though, it is highly sturdy and backed by premium-quality parts.

The internal gas piping, for instance, is made up of highly robust steel and similarly, the aluminum-made receiver is very durable too. The projectiles are propelled by compressed gas, but the tank is sold separately.

Customizability, as with the previous entry from Tippmann, is the best aspect of this marker. You can add accessories to your liking to suit your gaming style. This makes the marker all the more versatile and does not limit you to using it in a certain predefined manner.

The semi-automatic firing mechanism is perfect for ammo conservation when using the mag-fed mechanism but is rapid enough to do some serious damage.

The Tippmann TMC .50 Cal Paintball Marker is the smaller cousin of the .68 cal model, but it performs just as well. It is highly versatile and customizable, you can use it in a manner aligned perfectly with your strengths. A highly recommended option for tactical players.

The Valken M17 A2 Magfed Paintball Marker is perfect for intense action and fast-paced gameplay. This model not only features the standard semi-automatic firing option but also allows you to fire it in fully automatic mode.

You can unleash the full extent of your wrath when the opportunity presents itself or tactically conserve ammo until it does so. Since the M17 also features a safety lock mechanism, you don’t have to worry about it shooting by accident when you’re not playing.

The design has a realistic look, reminiscent of a military-grade standard issue assault rifle, and it is surprisingly lightweight too. The mag-fed loading mechanism also adds to the realism of combat by forcing players to consider when and when not to shoot.

For best results, use the model with a dedicated HPA tank, and not a carbon dioxide one. You will appreciate the enhanced accuracy of this model, I for one adore it for its ability to take down a target from afar.

All you need is a decent scope and some stealth skills, your clueless opponents won’t know what hit ’em.

The Valken M17 A2 Magfed Paintball Marker is a true masterpiece. This paintball gun is based on an assault rifle design.

The user can either rapid-fire pellets via the fully automatic mode or conserve ammo using the semi-automatic mode. This enhanced versatility makes it perfect for dominating the field, earning it a place among the best magazine fed paintball guns.

In case you don’t already know, Eclipse is a leading manufacturer of paintball markers, but this model is their first mag-fed marker. Don’t skip ahead, just hear me out. This model is well worth your attention and admiration.

This marker reflects the well-established excellence of Eclipse manufacturing that gave us a myriad of paintball products to be amazed by. The model operates with DAM magazines and offers a consistent and decent fire rate.

You will find it to be deceptively lightweight, and yet marvelously sturdy. In a paintball arena, this model will help you dominate your opponents not only through sheer force but enhanced accuracy.

However, that’s not even the best part. The greatest thing about this model is that it is highly customizable and by customizable I don’t mean like adding a few accessories. I mean overhauling the way this gun plays.

Whether you like to play as a recon-styled player, sniping from a distance, or a full-out assault-type with all guns blazing, this unit can be whatever you want it to be. This is all thanks to the EMC rail kit (built-in) which allows you to use this model according to your playing style.

The Planet Eclipse EMF100 Mag Fed Paintball Marker reflects years of manufacturing excellence and experimentation with novel ideas. Eclipse has managed to provide us with a model boasting unparalleled versatility and customizability, perfect for every player.

The First Strike FSC Compact Paintball Pistol is the perfect companion for any of the aforementioned paintball markers. It looks so realistic that anyone can easily mistake it for the real deal, for that matter, I suggest that you never carry it out and pretend that it is.

But all jokes aside, this is one magnificent piece of craftsmanship. The smaller size and compact design are meant to make it the perfect secondary weapon.

In a mag-fed competition, every round, every shot counts. You don’t want to be stuck in a firefight with an empty clip, and if you happen to be in such a situation, you can whip out this little fellow, make some blind shots, and dash for cover!

The only limitation of this model is that it is a secondary weapon, effective only in close quarters. However, any experienced paintballer such as myself can list dozens of scenarios where having such a sidearm can be very helpful.

The First Strike FSC Compact Paintball Pistol is a deceptively realistic model featuring a mag-fed loading mechanism. This paintball gun is ideal for use in close-quarter combat, as a secondary weapon. 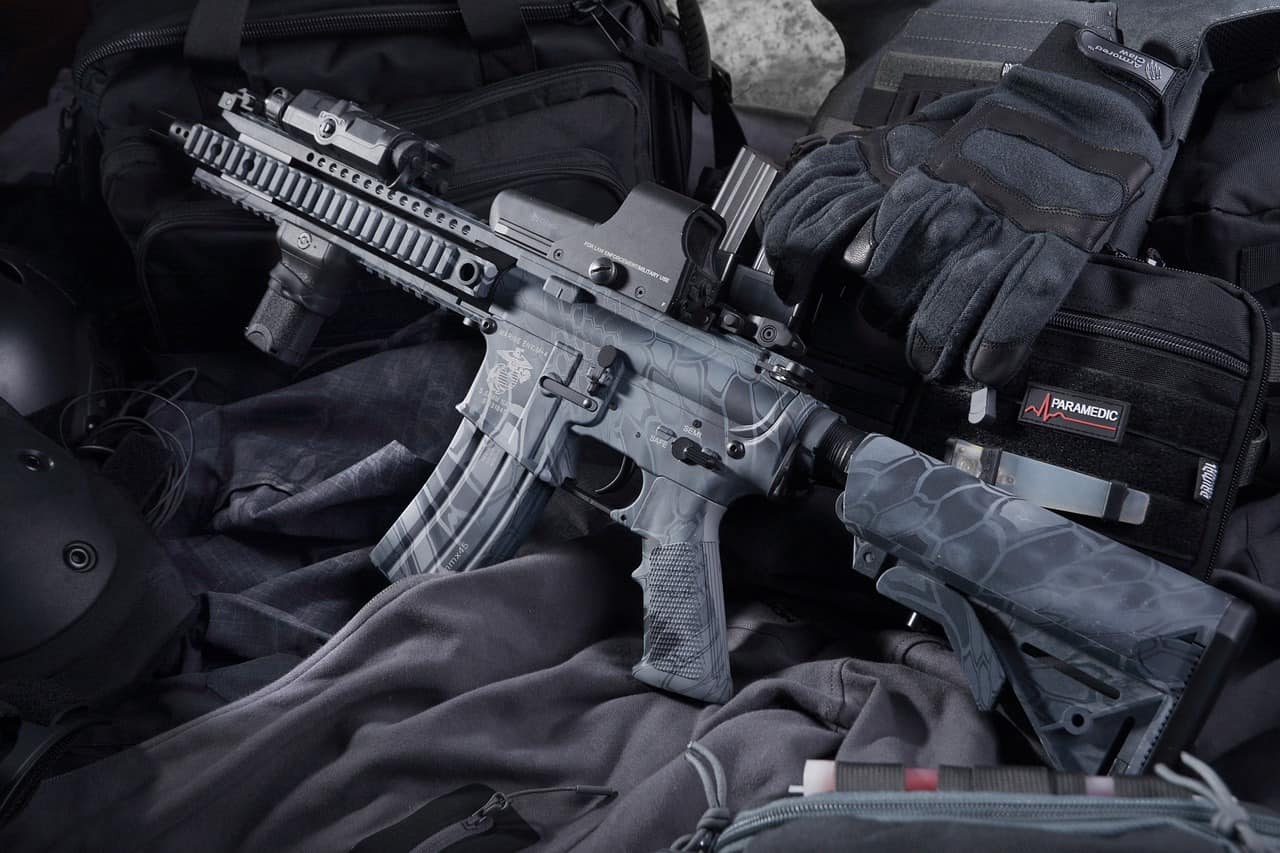 Mag-fed paintball markers have grown in popularity in recent years and I am sure that you’re itching to get your hands on the first model that you come across and jump into the field of action. Hold it right there, soldier. In this arena, we have some rules.

The first one is to never enter the field unprepared. Equipping yourself with a cheap model is just as good as holding out a ‘kill me’ sign in competitive paintballing where every shot counts.

Consider the following points before you make the final decision to ensure that you get the best paintball marker for an action-packed clash.

The idea behind having a mag-fed paintball contest is to push yourself against the highest test of realism, a sort of military simulation, often shortened as MilSim. But this does not mean that you should be hiding behind dumpsters because you ran out of ammo.

Instead, make sure that your mags hold a considerable amount of pellets. Mostly, the number lies around 20 in the case of bigger guns, while pistols may have less than half that many pellets in them.

This is a no-brainer but I’ll say it for the record: you should also carry extra mags with you and be completely equipped for the duel in other aspects as well.

PS, if a weapon offers both mag-fed and conventional loading mechanisms, give it precedence over those that can only perform one of these.

Customizability equals freedom. The more you can tweak your weapon to suit your needs (both practical and aesthetic), the better. Ideally, you should play according to your strengths, but that is impossible if your marker won’t permit it.

Moreover, a paintball gun should be useful in multiple contexts. For instance, consider this: you’ve taken down two opposing players from a distance and are moving forward, cautiously.

And then you find three opposing players approaching from your side. What do you do? If your weapon offers the freedom of switching to automatic fire, I suggest doing that and making a sprint for cover.

This, of course, is not possible if your weapon is only meant for sniping and not assault-type play. This shows that versatility can be a game-changer.

They say looks aren’t everything. Yup, in ‘Bizzaro world’ maybe. Here, we like things that look good and this applies to paintball guns too. Never underestimate the importance of a detailed design, you’ll be using the gun for some time so it’s better if you like the way it looks.

And lastly, be sure to choose a model that is both sturdy and lightweight. This way it will endure rough handling and be easy to carry around during combat.

Before you move on, please do check out this hilarious paintball scene from ‘The Big Bang Theory’ (my favorite sitcom).

The products listed above are some of the most well-received and highly rated in the market, so much so that most of them sell out before you can say “paintball.”

My personal favorite is the Valken M17 A2 Magfed Paintball Marker due to its premium-quality build and versatile functionality (especially the fully automatic firing option).

However, if you’re on a tight budget, you can try out the Tippmann TMC MAGFED Paintball Marker which is the best budget-friendly mag-fed paintball marker. You can’t go wrong with any of these markers.

In case you skipped the value section preceding this one, I highly recommend that you check it out, it will be immensely helpful for you when making a choice. I’ll catch you with the next one and until then, give ‘em hell, soldier!